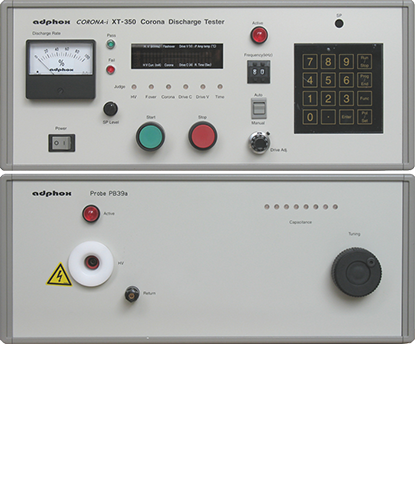 XT-350 tests for the presence of corona discharges and flashovers of test objects by generating selectable voltages (0 to 10 kVrms, tuning is required) at selectable frequencies (10 k to 100 kHz) at the HV terminal and applying this to the test object.
Because you can accurately detect corona discharges that were previously difficult to detect, we believe that this tester will be useful improving your product reliability.

It is very dangerous if there is corona discharge in a high-voltage supply circuit. You can investigate this as well with the XT-350.
For example, it is now possible to carry out insulation testing that was previously impossible, such as for the corona discharge withstand voltage between connectors or high-voltage patterns of printed circuit boards and the chassis.

The high voltage current (HV Curr.) flowing in the load is shown on the display of the XT-350 so you can see the impedance of the test object. This is useful for estimating the state of deterioration during endurance testing and other testing.
We have prepared a tuning mechanism that enables you to change the impedance of the test circuit for the capacity load of high voltage capacitors and other test items.

Corona DischargeDisplays 0 to 100%. Detect the corona discharge signal included in the electric current flowing in an examination object. (It is not indication of electric charge)
(There is explanation on page 32 about an electric discharge rate)